Who was the first person to measure the size of the Earth? 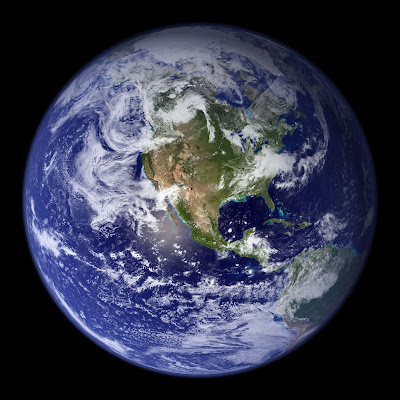 For more than 2000 years men have known that the world is a great ball, but, although Eratosthenes measured its size about 200 B.C.  , some people still thought it was flat, and in Europe Galileo (1564-1642 was abused and persecuted for saying that the world went round the sun, rather than that the sun revolved round it.  We must remember the importance of not for getting the truths discovered by those who lived before us, perhaps many, many years ago.  Are you today as clever as Eratosthenes was more than 2000 years ago?  Before I describe how he measured the earth, I want you to understand the geometry he used for his calculations.  If you already do understand what follows you must forgive me, but first glance at the next four paragraphs to make sure.  Eratosthenes knew that two parallel lines were always the same distance apart, and that the corresponding angles they made with any other line through them would always be equal.  In Fig.  1 AB and CD are parallel and the corresponding angles marked C 1 and C 2 are equal.  If two lines are parallel the corresponding angles made by another line crossing them are always equal.

About latitude and longitude here 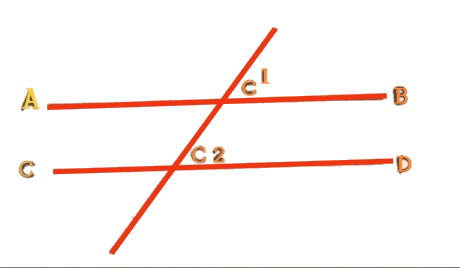 How is the circumference of the Earth measured?

earth and your body from feet to head points to the zenith of the place where you are standing.  You have almost certainly heard that there are 360⁰ ​​degrees (the symbol for degree is) in a circle.  Have you ever wondered why 360 and not some more easy number like 100?  The reason has to do with the time it takes the earth to revolve round the sun, roughly 3651 days, and long ago men thought the earth revolved 1 ° each day.  So now we use of the word ‘degree’ as a measure of the circumference of a circle or of the angle where two straight lines meet.  The angle at O ​​between AO and CO in Fig.  2 is 90 ° (what is called a right angle) or a quarter of the circle. 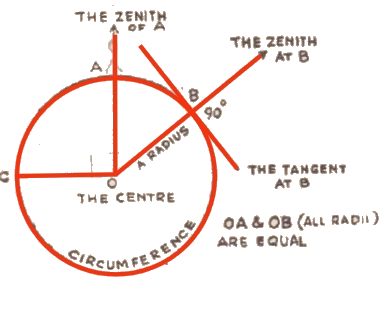 Now we can describe how Eratos thenes measured the earth.  He lived in Egypt and he noticed that the sun was in the zenith at Aswan at noon on a certain day.  On the same date at the same time he measured the angle bet ween the sun’s rays and the zenith (called the zenith distance of the sun) at Alexandria . He thus got a figure like this 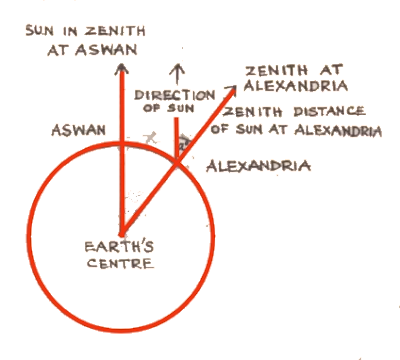 You may ask why the lines pointing to the sun from Aswan and Alexandria look parallel.  They should, of course, meet at the sun, but the sun is so far off that by the time its rays reach the earth they are so nearly parallel that we may take them to be so.  If you look at Fig.  4, you can see that in position S, the sun’s rays are nowhere nearly parallel, but in position N they are more nearly so.  Now the sun is so far off that we cannot draw a figure on a sheet of paper that would show the earth and its relative size and distance from the sun, but you can imagine that as N gets further and further away the sun’s rays would become  more and more nearly parallel.  You may also ask how Erastosthenes measured the zenith distance of the sun at Alexandria.  If the sun is visible you can measure its zenith distance

like this.  Put a pole upright on a level bit of ground and mark where the end of its shadow falls at noon .  The angle marked a ° is 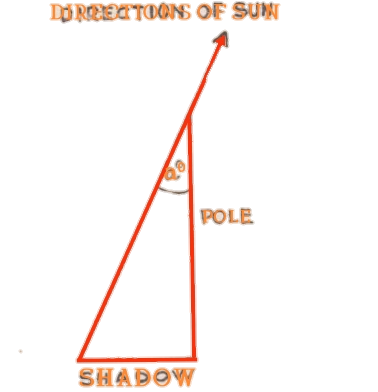 the zenith distance of the sun.  .  How do you measure this angle and how do you know it gives the zenith distance of the sun?  This involves a bit more geometry and if you know it already only glance through the next two paragraphs.  You would have to make a drawing of the pole and shadow to scale, that is, if the pole is one meter high above the ground, draw a line to represent it 10 cm.  long.  Then at right angles draw another line to the same scale (that is

divide its actual length by 10), then measure Za (the sign for angle is 2) with a protractor, the instrument used for measuring angles.  Za is the same as the zenith distance of the sun because it is vertically opposite to it and verti cally opposite angles are equal.  If you know how to prove this, leave out the next paragraph. 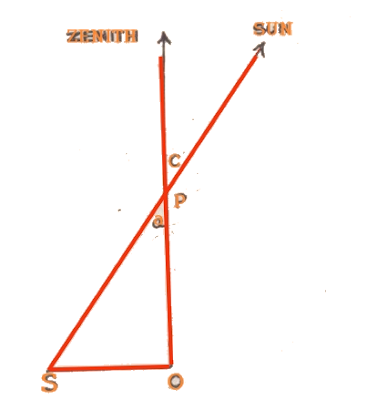 In Fig.  6 OP is the pole pointing to the zenith, OS is the shadow and SP points to the sun.  Ze between the zenith and the sun’s rays is the zenith distance of the sun.  Now Lc plus ZP make a straight line, or 180 degrees and ZP plus La make another straight

line.  We get therefore what is called an equation: Lc + ZP = LP + LC Take LP from both sides of the equation and the remainders Lc and La are equal.  These are known as vertically opposite angles.  This chapter is getting rather long.  So let us get back to Eratosthenes, and look again at Fig.  3. He had measured the zenith distance of the sun at Alexandria (aº).  He knew that the smaller angle shown at the earth’s center corresponded to the zenith dis tance at Alexandria because the sun’s rays were parallel, therefore, it equalized aº.  He also measured the distance from

Aswan to Alexandria;  let us call it x kilometers and do a little Algebra.  ‘If aº equals x kilometers then 1 ° equals xſa kilometers 360x:.  360 ° equal kilometers a We have turned a into 1 by dividing it by a and so must do the same to x to keep the equations true.  According to Eratosthenes’ measu rements and calculation the world was about 40,000 kilometers round, and he was not far out.