Some effects of the daily rotation of 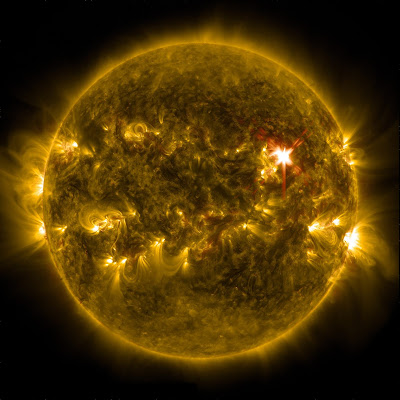 the Earth and its annual revolution

Sol is the Latin word for sun, and the earth belongs to what is called the Solar System.  The sun is a star, and the earth one of its planets (from the Greek word for a wanderer’) that revolve around it.  There are several hundred planets of which the easiest for us to see are Jupiter, Venus and Mars, called in Hindi Brihaspati, Shukra and Mangal.  The moon re volves round the earth, and while the light from the sun and stars is direct, that from the planets, their moons or satellites (from the Latin for ‘ an atten dant’) and our moon is reflected from the sun.  [ For more about the moon see chapter 17. ] The sun is the source of the heat and light by which we live.  Though Mars may have some sort of primitive vegetable life , the other planets are too hot or too cold , or their atmos phere ?  is too poisonous for life, as we know it, to exist.  The sun holds its planets revolving round it by gravity, while they are kept from falling into the sun by the speed at which they revolve.  The same control is exercised by the planets over their moons.  For many centuries ( from the Latin for one hundred) man thought that the earth was the center of the universe, of all existing things, and that the sun went round the earth.  It was obvious, you could see it doing so;  but if you have ever sat in a train in a station and looked out of the window at a train on the next line to yours , you may have thought that your train had started whereas , in fact , it was the other train that was moving  .  Our eyes can deceive us.  In the early civilizations of Babylon , Egypt , and China people still thought the earth was flat .  It was the Greeks who realized it was spherical, but even they thought it was the center of every thing, and that the sun and stars revolved around it.  For centuries men had been making observations of the apparent changes in position of the sun and moon and stars , and if you want to arrive at the truth , be a real scientist , you too must always be observing and asking your self the reasons for what  you observe.  Some parents and even teachers get tired of being asked ‘ Why ?  ‘Why?  ‘ ” Why ? But they should try to be patient and answer the questions ( and not be afraid of saying ‘ I don’t know ? if they do not ) . It is by observation Enquiry, recognition of something you don’t understand, and thought, that mankind has learned more and more of the truth.  You probably know the story of the discovery of penicillin, how Dr Alexander Fleming noticed an unexpected effect of a mould that had accidentally got into some bac teria he was experimenting with.  He asked himself “ Why ?  ‘ What has happened?  And ten years later other scientists, working on his observa tions, were able to produce a great life – saver.  In Europe a Pole , Copernicus 1473 1543 , about the time when Babar founded the Mogul Empire , came to the conclusion that the earth moves round the sun and not the sun round the earth , and a hundred years later the German , Kepler (  1571-1630 ) , working on observations made by the Dane , Tycho Brahe (1546-1601 ) , after nine years of thought and mathematic calculations , worked out laws showing how the planets move round the sun in ellipses – regular ovals , not circles  .  Now , from photographs taken from rockets and from the moon , man can see that the earth is not flat , but it was only in 1882 that the Catholic Church allowed its followers to read the works of Copernicus .  Truth or fact is not always easy to find, and when it is found, it is not always easy to recog nise.  I want now to describe some of the facts that mankind has found and recognized after thousands of years of observation and thought.  First, there are some words that I must define.  A plane as you probably know is a level surface like the top of a table, but it can also be an imaginary surface.  If you take an apple to repre sent the earth and cut it in halves across the core along its equator then you see the plane of the equator ex posed — the surface you cut through .  The next word is ecliptic, another Greek word for the sun’s apparent orbit, which is a Latin word meaning ‘ wheel ‘, and the plane of the ecliptic is the imaginary plane in which the earth revolves round the sun once a year in an ellipse.  The earth also rotates once round its axis every 24 hours : not always exactly 24 hours , but you must wait to learn why ‘ not exactly because it’s a complicated business.

Some effects of the daily rotation

of the Earth and its annual

revolution round the Sun

how summer and winter are caused by the earth’s revolution round the sun and by this inclination of the earth’s axis , and why the tropics and arctic and antarctic circles are where they are .  In Fig.  18 you must imagine your self looking down on the North Pole on a day ( there are only two in the year as will be explained later ) when the sun is in the zenith at the equator .  I have drawn four meridians and now I will explain the meaning of that word.  It comes again from Latin and means middle of the day.  All places on the same meridian will have mid day or noon at the same time, and that is why N or S lines from the pole to the equator are called meridians.  As the world rotates each of these meri dians will move round anti – clockwise .  The one in the figure shown as at noon will move to sunset , then to midnight , then to sunrise and so back to noon on the next day .  When the sun is in the zenith at the equator , everywhere on the earth there is twelve hours of light and twelve hours of darkness , and the line dividing day and night , called the shadow circle , passes through the poles .  But , as I have said , the sun is not in the zenith at the equator more than twice a year , and that is why most of the world sometimes has shorter days and longer nights and at other times longer days and shorter nights .  Fig.  19 will help to explain this , but first there are two new words for you

to understand : equinox and solstice.  An equinox (Latin for ‘ equal night) is when the whole earth, as in Fig.  18 , has 12 hours of light and 12 hours of darkness , or equal night and day .  This happens twice a year , on about March 21st and September 22nd .  Solstice (again Latin, meaning the ‘ standing sun ‘) is when the sun appears to pause in its apparent journey from north to south and then from south to north.  This apparent movement of the sun is , as you will now I hope understand , the result of the earth ‘s actual movement , its revolution round the sun .  The solstices are on about June 21st and December 22nd .  Fig.  19 shows the earth in relation to the sun’s rays at the June and December solstices looking at the earth across the plane of the ecliptic.  The earth , of course , is so far from the sun that we cannot put the sun into the picture but its parallel rays are shown and the actual distance between the positions of the earth at the solstices is roughly 300,000,000 km .  At the June solstice the North Pole is pointed most toward the sun and at the Decem ber solstice most away from it .  In June the northern hemisphere has long days and short nights ( mid summer ) and the southern hemisphere short days and long nights ( mid winter ) and in December the northern hemisphere has mid winter and the mid summer .  At the equator night and day are always 12 hours each .

on Jnne 21st it is tilted most towards the sun , the arctic circle is wholly in the sunlight .  On March 21st and Sep tember 21st the shadow circle goes through the poles , the sun is in the zenith at the equator , and day and night are equal in all latitudes .  Againwe see that in the northern hemisphere December is winter , March spring , June summer and September autumn ;  while in the southern hemisphere June is winter , September spring , December summer and March autumn .  The difference in seasons increases as you go away from the equator , where the sun is never more than 23⅓º from the zenith , till at the poles there are six months of light and six months of darkness each year .  All this can be better shown with the help of an orrery , a clockwork model , but very expensive .  Try taking your ball on a knitting needle or piece of wire and moving it round an electric bulb, remembering to keep it tilted at the correct angle.  This may help you !  There is one more effect of the sun I want you to understand now .  Perhaps you may think that the equator is hotter because it is nearer to the sun than the poles.  This is not so.  Actually the earth is nearest to the sun in the winter of the northern hemisphere, but this need not worry you at present.  What makes the sun warmer is the concentration of its rays.  In Fig.  21 you see equal amounts of sunlight coming to the earth , but they are spread over unequal amounts of the earth’s surface , therefore BC will be warmer than AB .  The nearer the sun is to the zenith , the more concentrated its rays will be and therefore the more it warms us.  That is why the equator where the zenith distance of the sun is never more than 23⅓ ° is always well warmed , and why it is warmer , when the sun is higher in the sky , in summer and mid day than in winter or the early morn  ing.  You must remember that the sun takes some time to heat up the earth and so on a fine day noon is not the hottest time , but a bit after noon , and July and August may be hotter than June in the northern hemisphere and January and February  than December in the southern hemisphere .  Also the earth takes some time to cool, so mid night and midwinter are not usually, the coldest

times.Some effects of the daily rotation of the Earth and its annual revolution round the Sun