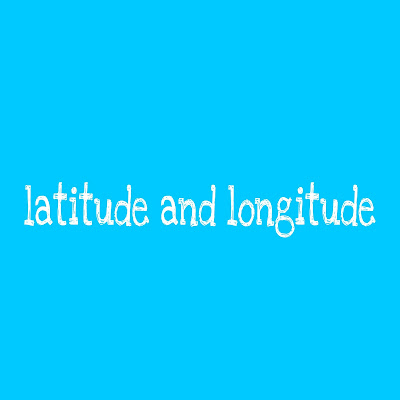 If you are sitting in a classroom the teacher , if he is like me , apt to forget people’s names , might refer to you as the boy in the third row from the front and the sixth file from the left . That is to say you are named by your position which is fixed by the meeting place of two named lines , rows and files . This is what lines of latitude and longitude are used for – to name positions on the earth’s surface .

What are lines latitude and longitude introduction

If you want to understand easily about the world , try to get hold of a globe representing the earth . Any cheap one will do , or even an old ball with a knitting needle or a piece of stiff wire stuck through its center and coming out at two sides . Also , always have your pencil and some paper ready to draw your own diagrams and figures . What you see and draw for yourself is easier to understand and remember than what you read.

The earth is not quite a true ball , for it is a little flattened at the top and bottom , what are called the North and South Poles , the two places where your piece of wire comes out of your ball . A true ball is called a sphere , and the earth is called an oblate spheroid , a name you can forget for the present , as , until you come to more advanced geography , you can take the world to be a sphere , a word derived from the Greek for a ball .

A word you must remember is axis. This is an interesting word because it reminds us of how a number of words in many different languages ​​are much alike and seem to have had the same ancestor. Axis is Latin , aksha is Sanskrit , axon is Greek , and there are very similar old Norse and German words . You know what the axis of a wheel is — the rod or point round which the wheel revolves. The world’s axis is an imaginary line about which the world spins or rotates and is represented by the piece of wire through your ball.

Another word to know is equator , derived from the Latin for ‘ equal ‘ . This is an imaginary line round the middle of the world exactly between the North and South Poles, dividing the world into two halves or hemi spheres.

The equator is an imaginary line on the earth’s surface, but on a globe or map it is drawn. The problem for map makers was how to draw a network of named lines by using which positions of places could be fixed on the earth’s surface. Lines or parallels of latitude were not difficult . Map makers started with the equator in the center and then drew lines parallel to it until they reached the North and South Poles , and these lines were named by the number of degrees between each .

Imagine your ball cut down the axis, like an apple down the core, and divided into two hemispheres.

If the equator is called 0 ° , then the North Pole will be 90 ° N. and the South Pole 90 ° S. and the place marked x will be a certain number of degrees N. depending on the angle marked in Fig . 7. I hope you will wonder how any one could go to the center of the earth to measure this angle. The answer is that it can be measured on the surface of the earth from the rays of the sun ( this is what Eratosthenes knew ), or from the Pole Star , and how this is done will be explained in chapter 8. What you need to know now is that parallels of latitude , lines

running East and West , can be imagined on the earth’s surface and drawn on maps. I have drawn a few on Fig. 8 , and these correspond to the rows in a | classroom with which we started this chapter, and can be used for fixing position in degrees north or south of the equator. Parallels of latitude will become shorter and shorter as you go north or south from the equator , till they become points at the poles . A low latitude is near to the equator and a high latitude near to the poles .

The other lines , the files , called s meridians of longitude – a name I will s explain later – were more difficult to . deal with. It was easy to imagine lines running round the globe from the North Pole to the South making angles at the poles , but which was to be 7 called 0 ° , and how were the angles to be measured ? I will first explain how the meridians are named and measured on a map or figure, and leave till chapter 8, the more difficult business of measuring their angles on the earth’s surface. It took man a long time to be able to do this ( he had to wait till he had invented a clock that would keep accurate time at sea ) so we too will wait a bit .

Now take your ball and draw any line on it from the North Pole to the South . All lines that you can draw will be the same length, half the circumference of the ball. The problem , when we want to name or number these lines , is where shall we start ? For many years different countries wanted to start from the line going through their capital city ( some still do ), but this would have meant that each country gave a different number to meridians. In this classroom we named the files from the left because we thought of the file at the side of the room as the first file, but on a sphere there is no obvious first file. You can imagine what would happen if the head of the class sitting in the third file from the left , claimed that his must be the starting file , and the captain of football in the fifth file said that files must be numbered from his . If they were both in the front row , the student between them would be called ‘ row one , one to the right by those who agreed with the head of the class , and ‘ row one , one to the left by the footballers.

If all the other captains claimed their files as the starting file there would be a real muddled . For this reason the world had to agree from which Meri dian to start numbering, and eventually most countries agreed on the one going through Greenwich in England. This was because, at the time when the problem of measuring longitude accu rately by sailors and explorers was eventually solved, much of the work in doing so was carried out by sailors and explorers from Britain and co-ordinated at the Observatory at Green wich.

Now we can see how meridians are numbered. Turn your ball , or the apple cut along the equator , so that you are looking down on the North Pole , and draw a line PG to represent the meridian going through Green wich .

The name of the meridian PA will be the number of degrees of the Z APG east of Greenwich and of meridian PB the number of degrees of the ZGPB west of Greenwich . How these angles are measured on the surface of the earth , I will , as I have said , explain later , but you can measure them for yourself on the figure , and you will see that you can only go as far as 180 ° either east or west , and that each full line right round the world will be so many degrees ( let us say X ) , east of Greenwich on half of the world , and ( 180 — X ) west of Greenwich the other half of the world if we imagine 180 ° and 0 ° dividing the world into two halves . In Fig. 10 you can see only the northern hemisphere , but you can turn your ball or apple so as to see the southern hemisphere as well .

This is an example of a great difficulty for map makers. Maps are usually flat on sheets of paper, but the world is spherical, and it is impossible to make an exact map of a large part of the earth’s surface. Geographers , there fore , use various methods known as map projections , some of which will be described later , to show large areas . In some of these all parallels of latitude are shown as the same length , though you know they grow shorter the nearer they are to the poles , and meridians are sometimes shown as parallel north and south lines although you now know that they meet at the poles . But a net work of parallels and meridians, how ever drawn, can be used to show the position of any place on the earth’s surface. In most atlases , and you should always have one by you , you will find the latitude ( always given first ) and the longitude of places given in the index ‘ so that you can find them on the page of the atlas referred to. Each degree is divided into 60 minutes and each minute into 60 seconds , but usually only the degrees and the minutes will be given . In my atlas , Delhi is given as 28.35 N. , 77.5 E. so when I look for it , I look just over half a degree north of parallel 28 N. and a tiny bit further east than meri dian 77 E. Quito is 0.17 S. , 78.26 W. so I look for it just south of the equator and nearly half a degree further west than 78 ° W. The School Atlas published by the Survey of India does not give the latitude and longitude of a place in the index but tells you the ‘ square’in which to find it , and having found it you can judge its latitude and longitude from the parallels and meridians drawn on the map . Now in Figs. 11 and 12 think out the latitude and longitude of the places marked and write them down . Then look at the answers below and see if you have got them right.

I wonder if you have ever wondered why an atlas is called by this name. Atlas was a Titan or giant whom the Greeks imagined as holding up the heavens on his shoulders. He lived in the Atlas mountains in Africa . When Mercator published his father’s maps in 1595 he put on the title page a picture of Atlas with the world on his back, and since then a book of maps has been called an atlas.